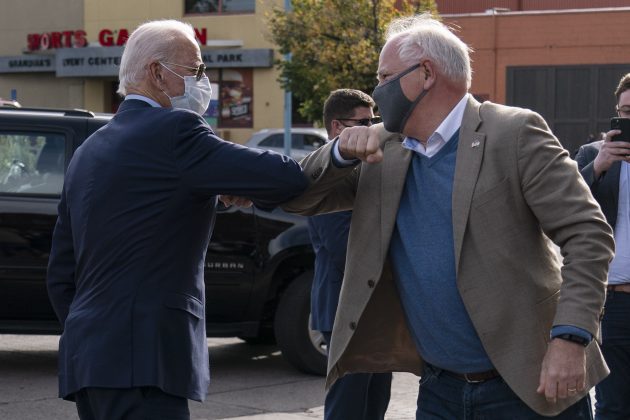 Tyrant Tim Walz is winning this battle. Sleepy Joe Biden just appointed Walz as a Co-Chair of his Governor’s Council. These two radicals are now working together to ruin Minnesota AND the Nation!

You’ve already heard what they have in the works…

This is all in preparation for their overreaction to the “Delta Variant” of the coronavirus, which is causing places like Australia to descend back into lockdowns! In European countries like France, President Macron tried to issue a Health Pass but has since backtracked due to massive riots.

"Anyone entering a restaurant, café, shopping centre, hospital or taking a long-distance train in France will have to show a special Covid health pass from August, Emmanuel Macron has announced, as France tightens restrictions to contain the surging Delta variant."

"The same Covid health pass – which shows that a person has been vaccinated or had a recent negative Covid test – will be similarly required for anyone over the age of 12 to enter a cinema, theatre, museum, theme park or cultural centre from as early as 21 July, the president said, in a bid to pressure more French people to take up vaccines."

If things continue like this, Minnesota will be next! You and I must act right now to stop the impending tyrannical edicts.

NSLA is launching ads focused on stopping Biden and Walz' door-to-door vaccine checks. Will you help us get them up and running?

Your North Star Liberty Alliance set out to Impeach Tyrant Tim last year, and we remain committed to that effort. In fact, lazy legislators in St. Paul are starting to feel the pain from our pressure campaigns! They'll spread lies about freedom-lovers like you. They don't like that you are a part of a grassroots effort to protect the liberties that they are trying to steal. They don't like that you're getting involved.

Thanks to your activism and contributions through North Star Liberty Alliance, my team can fund grassroots activism that forces swampy politicians to do their jobs.

Have you seen the ads that we ran exposing legislators who refuse to sponsor the Impeachment Resolution? Where else do your contributions go? Towards Impeachment Town Halls! My team at North Star Liberty Alliance has been traveling the state, gathering with patriots in the House Districts of RINO Republicans who refuse to sign on to Articles of Impeachment.

But you and I only win when these politicians agree to co-sponsor Impeachment.

That’s why my team will continue to apply pressure. Will you help fight to Impeach Walz? Give $25, $50, $100 or whatever you can put into this fight!

When activists force their legislators to Impeach Walz, they send a message to Sleepy Joe Biden that the people of Minnesota WILL NOT comply with his door-to-door vaccine checks and mass censorship.

Have you called your legislator recently? If not, they need to hear from you! Use the link below to call your State Representative and tell them to get on board with the Impeachment effort.

We've also got word from patriots reporting back to us that the political class is very concerned with the movement to Impeach Walz. So much so that there are operatives calling around to people asking about the Impeachment Town Halls and our mobilization programs. That means things are working! The progress we have made with this thing so far is beyond exciting! Now that legislators are beginning to buckle, we can deliver the final blow.

Help North Star Liberty Alliance run ads exposing legislators who refuse to represent you. Give $25, $50, $100 or whatever you can put into this fight!

"It does not take a majority to prevail...but rather an irate, tireless minority, keen on setting brushfires of freedom in the minds of men." - Samuel Adams

With the help of Patriots like you, we can expose these RINOs who are blocking Impeachment for all to see.

Please continue to fight on and let these politicians NO MORE!