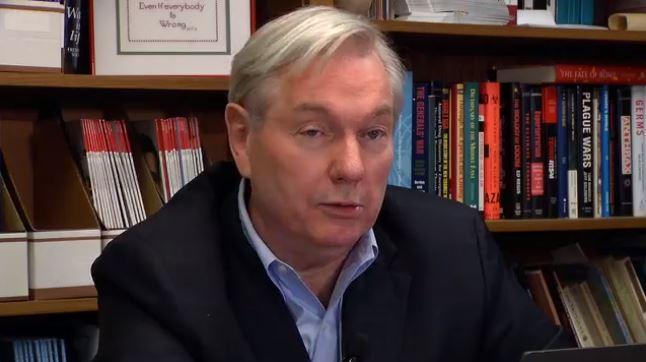 On the subject of cloth and paper face masks, Dr. Osterholm said that wearing them was “like fixing three of the five sprinklers on your submarine.” In the same video, he goes on to point out the “very exhaustive studies on masks” in 1918, which he says “not one of them found that [masks] made any difference”.

Dr. Osterholm went on to laugh at the thought of cloth masks making any difference. This guy is a leader in epidemiology, and a new Biden appointee. Surely his opinion counts for something to the tyrants around the country.

Osterholm says at the very beginning of the video that we, as Americans want to do something to help, and he’s right. But, as he said throughout his video, there is no substantial evidence to support a mask mandate.

It should be the choice of every American whether or not they want to wear a mask. The United States is about liberty and justice for all. In this country, healthcare should be an individual decision. The same applies to staying home. Americans are smart enough to weigh the risks of this virus to themselves and their family, and choose whether to stay home or not.

The ability to assess and assume risks is a human right as sacred as speech, religion, or self defense. Liberty is the fabric the United States was woven from, and 245 years later, we’re debating about whether or not someone is allowed to breathe the way they see fit, or if the government ought to meddle in the matter of oxygen. It’s disgusting!

Since July 22nd, 2020, His Royal Highness Tim Walz has had his hand over the mouths of Minnesotans. The mandates, the lockdowns, they would make the founders roll over in their graves.

The good people of Minnesota have had their basic liberties trodden on for far too long. We’ve suffered under the thumb of Tim Walz, as he writes his unconstitutional edicts from his pretended throne in St. Paul. He needs to be held accountable.

Are you tired of Tyrannical Timmy’s abuse of unchecked power? Take action. Join our fight to hold Governor Walz accountable for his unconstitutional actions.