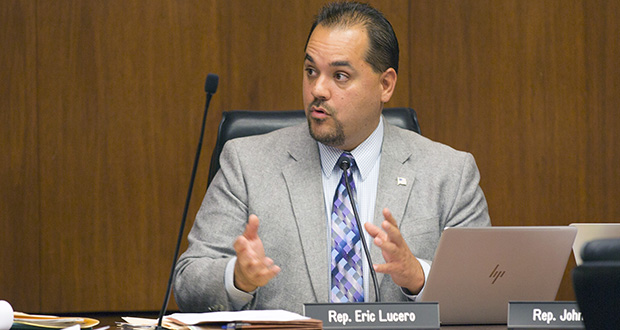 Supposed "Constitutional Conservatives" and "Liberty Legislators" are REFUSING to co-author the Impeachment Resolution -- HR2. These politicians parade around town and talk about how they are fighting for us. But they won't take the simple action of co-authoring Impeachment.

Gov. Walz has illegally and unconstitutionally created law out of thin air, invented criminal penalties going around the legislature, banned exercising religion and nonemergency medicine, and taken private property. He's locked us in our homes, destroyed businesses, instituted lockdowns taking away all of our rights, shuttered schools and these politicians won't hold him accountable and co-author Impeachment.

So the pressure campaign is in full swing.

Because of their refusal to sign on to Representative Mortensen’s Articles of Impeachment against Governor Walz, the North Star Liberty Alliance is jumping into action against so-called “conservative” legislators. Legislators like Rep. Eric Lucero will be hearing from the people in his district.

We'll be doing mailers, phone calls, targeted digital advertisements and more informing his constituents that he refuses to listen to their demands to co-author to Impeach Tyrant Tim Walz. He is supposed to work for his district! And stand up to the tyrannical edicts coming from Walz! But instead, Rep. Lucero is working for party leadership.

Party leadership put out the orders to not co-author Impeachment. Like a good party lapdog, Lucero dutifully did as he was told.

Here’s an exclusive first look at the mailer that was just sent out to voters in Lucero’s district informing them what he is up to: 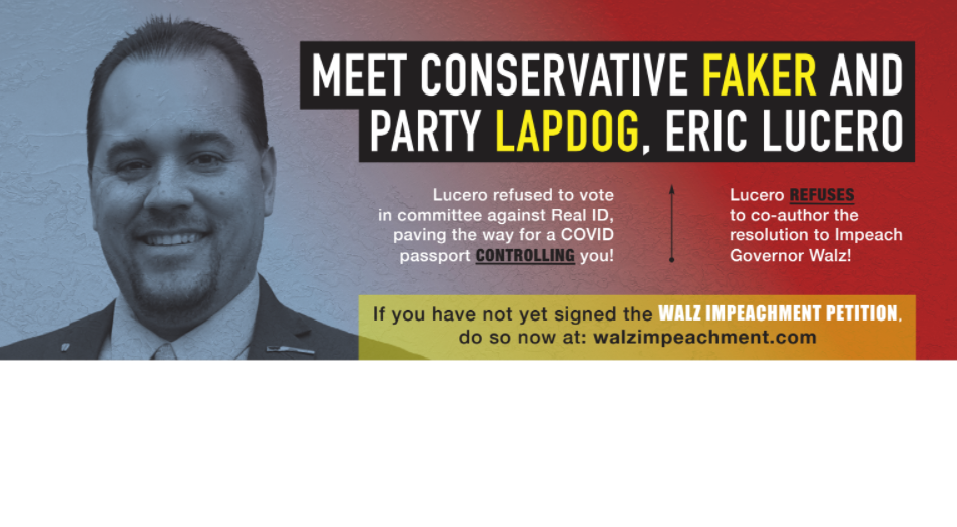 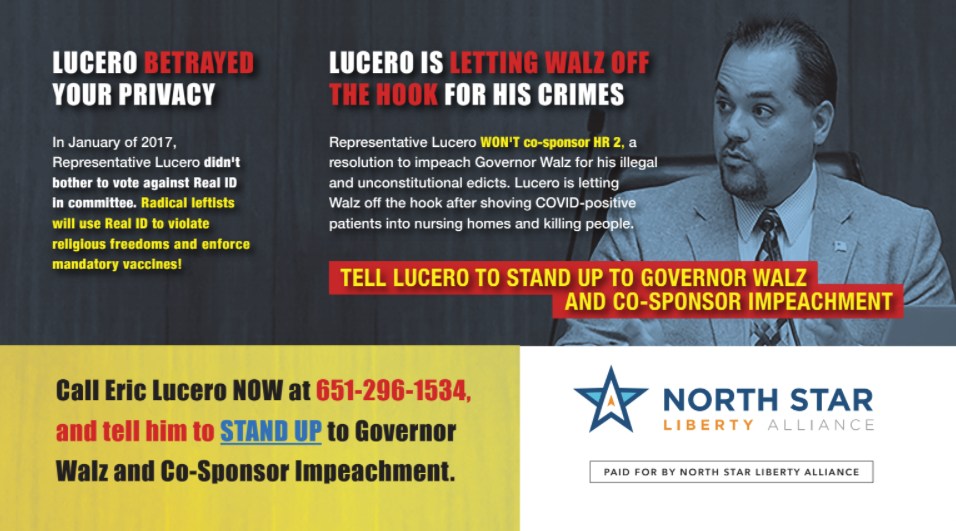 You see, not only did Representative Lucero forsake the voters by refusing to sign on to Impeachment, but by also allowing Real ID -- better named Dangerous ID -- to make it out of committee! This is the monster that was finally jammed through by the political machine in 2017 that is a massive intrusion into our private information.

Lucero showed up to the committee meeting in which this was heard, but didn’t vote against the bill! His vote would have been crucial to stopping the state level implementation of Dangerous ID. Now, radical leftists in St. Paul have the tools they need to institute COVID-19 Passports and further infringe upon your right to privacy!

My staff has prepared this mailer to be sent to THOUSANDS of households all across his district, so that Lucero will hear firsthand that his constituents are demanding he co-authors the Impeachment resolution!

This is the only language that these politicians speak. Unless it's made clear that ignoring their constituents' demands comes with a massive price, they don't care. The North Star Liberty Alliance cannot do it without the resources to amplify your message to co-author Impeach.

Help provide the resources to Impeach Governor Walz. Please give 100, $50, $25, or whatever you can afford to fuel this Impeachment fight.

With your contribution to this program, NSLA will be able to EXPOSE Lucero as the faker that he is.

Your donation will go directly to funding these digital ads, phone calls to people in the district and as much as we can muster to get the word out.

Contributions are critical, but there is always more to be done. You can help make Impeachment happen by checking off each of these Action Plan items:

If you are unable to do all those, please do what you can and pitch in to help fund this program. North Star Liberty Alliances is nothing without Liberty Lovers like you.

NSLA  doesn’t  have fat-cat lobbyists funding our organization like these politicians and their political party. This all comes from hardworking people like yourself who care about our freedom and holding Tyrant Tim accountable for his crimes and corruption against the people of Minnesota.

Justice must be served but it comes at the cost of pressuring these politicians letting them know what YOU demand of them. And when we have the resources available to expose these politicians, that's when things can change.

"When I feel the heat, I see the light"

And that's what our program is all about. It's about bringing as much political heat on these politicians as possible. With your help, Impeachment will get the committee hearing and floor vote that it deserves.