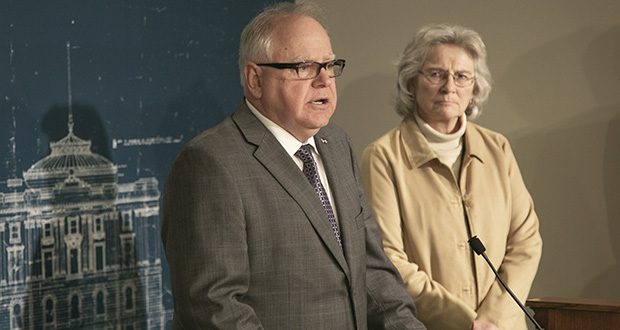 There are several mixed signals coming from Governor Walz’ administration on the future of his overreaching executive authority. On one hand, Walz has announced that he will be easing his extreme restrictions (Potentially late in the summer!) and on the other hand, Minnesota Department of Health (MDH) Commissioner Jan Malcolm has announced that Minnesota now has six cases of the “double mutant” COVID-19 variant. She also notes that:

"there is still an extremely high level of virus circulating all over the state."

When you compare Minnesota to other states like Texas or Florida, it is clear that Walz should give up his mask mandate right now, NOT in several months from now. Announcing his intention to get rid of the restrictions at some point in the future is his attempt to keep the public calm. Perhaps he is not ready to give up his authority because he is ready to lock down again.

Bring Me The News reports that the “double mutant” variation of COVID-19 has made its way from India to Minnesota. The World Health Organization believes that this variation could evade vaccine immunity, potentially meaning that Minnesota could be in serious trouble if Walz continues to wield his power like a tyrant.

Regardless of how serious this new variant may be, it is clear that the lockdowns and restrictions did not work. All they did is cost jobs and livelihoods in a poor attempt to make it look like serious action was being taken. Walz and his team will never admit to this, of course. After all, he needed an excuse to unilaterally write his own laws.

Regardless of what happens, the people of Minnesota cannot let Walz continue on his power trip. It’s time for the people to say that they have had enough of his overreaching orders and that the time to lift them is now. If you agree, then sign the petition to Impeach and remove Walz. It’s time to send a message to the executive branch and anyone who may replace Walz that this kind of tyranny is unacceptable.