Yesterday, the Star Tribune reported that Minnesota taxpayers paid $57,000 to celebrity food star, Andrew Zimmern, for him to post tweets online about Minnesota. 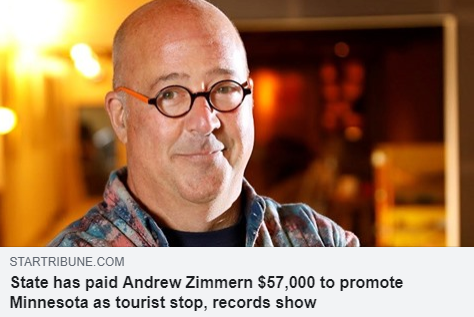 This is not a joke. This actually happened.

Politicians in St. Paul cry about how they don't have money for vital programs, yet we just paid $57,000 to a wealthy celebrity for tweets!

That is over $2,000 per tweet that you and I paid Andrew Zimmern!

This was done through the "Explore Minnesota" Program, a $14 Million dollar a year boondoggle that is supposed to "support tourism" for Minnesota.

St. Paul politicians claim we need tax hikes to pay for essential services and yet they apparently have money to pay celebrities for tweets.

What a total slap in the face to every taxpayer in Minnesota!

For all the talk among liberals about "The 1%" -- here is a prime example where Minnesota politicians are giving handouts to wealthy celebrities who do not need our charity.

And yes, paying someone over $2,000 per tweet is a charity. Period.

Apparently, Minnesota is not alone in throwing obscene amounts of money at celebrities.

In addition to the ridiculous pay-out to Zimmern, the State of Minnesota paid Jessica Brouillette, a freelance blogger/photographer, up to $3,000 to take pictures and write blogs posts about state hiking trails and parks.

The Star Tribune reports that Brouillette could not believe she was getting paid by the state to do this:

"It was a blast. I was like, 'Am I seriously getting paid to be here? Because I would come here anyway."

>>> SIGN THE CITIZEN PETITION to SHUT DOWN THE "EXPLORE MINNESOTA" PROGRAM >>>

Here is the text of the petition:

I am furious that you would think it a good idea to pay a celebrity $57,000 for tweets to promote tourism under the "Explore Minnesota" Program.

This calls into question how you likely are spending (wasting) our hard-earned tax dollars in other ways.

We have serious issues in this state that far outweigh wasting taxpayer dollars on "tourism promotion."

I call on you to IMMEDIATELY end the "Explore Minnesota" program.

Return the $14 Million dollars a year that you spend on this ridiculous program to taxpayers in Minnesota!

Stories like these are why people don't trust the government!

The whole program is such a joke!

The government does not create our economy -- free markets do.

How do we attract people to Minnesota?

Not through a government program, but through sound policies -- low taxes, less regulation on business and MORE FREEDOM!

This kind of thing makes me furious!

No wonder why people don't trust the government!

P.S. Please sign the citizen petition to SHUT DOWN the "Explore Minnesota" Program.

If they are willing to throw $57,000 dollars in taxpayer money at a celebrity millionaire, who knows what else they are doing?!?

Minnesotans have enough things to pay for in state government, tourism tweets do not make the cut.