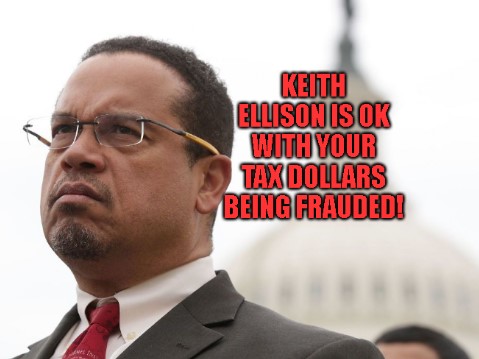 Another day, another reason to trust the free market over the government.

Recently some more news has come out about the massive Feeding Our Future fraud scheme. Just for a quick recap, the Feeding Our Future scheme was the nation’s biggest case of Covid-19 fraud, in which $250 million in taxpayer dollars were frauded during Covid-19. Already at least 50 individuals have been indicted and at least 4 have already pleaded guilty to this fraud.

Now, this is a big breach of trust. As taxpayers, we’re supposed to believe that the government is making sure our tax dollars are being properly handled. Unfortunately, that’s rarely the case and it looks like that wasn’t the case here. Sure Walz, Ellison, and education officials claim they did all they could to stop the fraud schemes and they tried to pass the blame to anyone else, but a new article from the Star Tribune tells a different tale. One that explains the many ways Tyrant Tim Walz, Keith Ellison, and the education officials failed all of us.

According to the article, Star Tribune states that: “state and federal records show that Minnesota officials provided federal authorities with little or no evidence that Feeding Our Future was misappropriating government funds.”

This lines up with what we already know. If you recall we previously covered how the Office of the Legislative Auditor admitted that they received no such warnings about the Feeding Our Future fraud.

The Star Tribune continues to help lay out the timeline of the facts. They say that because no evidence or bank statements were provided to the Federal Bureau of Investigation, the FBI had to come in and build the case from scratch. If Keith Ellison’s office had used its powers to investigate, it could have pulled bank records and noticed that “the alleged conspirators paid at least $524,579 in bribes and laundered $3.2 million in program funds between July 2020 and March 2021, prior to the FBI's involvement”

Keith Ellison didn’t even attempt his own investigation until February of 2022 after the Feeding Our Future nonprofit had been sent $250 million.

This is exactly what’s wrong with the government being the one to handle things. Your tax dollars are taken without your consent and given to projects you didn’t decide on. Then the government sits on its hands and continues to ignore giant blatant problems and fraud schemes while hundreds of millions of dollars taken from us are frauded. What’s worse is once the state and federal governments decide to finally start doing something it’s a long and expensive investigation. Feeding Our Future had still gotten funds while the FBI was doing their 10-month investigation and as a taxpayer, you paid for both.

This is a very volatile and inefficient system. The government is lumbering, expensive, slow to see how it wastes your resources, and slower to act. This is why the free market is much better. It would be right if you had control of where your money went. According to the Star Tribune, there were at least 3 whistle-blowers for Feeding Our Future and the nonprofit was still getting boatloads of money. The government didn’t give you the choice with what they did with your money once they had it, they wasted it for years. Under a free market, one of these 3 whistleblowers could have told the public what was going on and we could have chosen a real place to donate to so that we actually could have fed kids during the pandemic.

This is the exact reason why the free market can help us more than the government. The free market gives us control over ourselves and the ability to make the right decision and help those in front of us. Waiting for the government to solve our problems like this only made things worse and it provide meals to the kids it should have.

We thank you so much for reading our articles and taking the time to research the truth. Our articles are committed to spreading truth and awareness about your state government. If you like what we do please consider donating to us so that we may continue fighting the good fight!