Government cracks down on Patriots

Government cracks down on Patriots 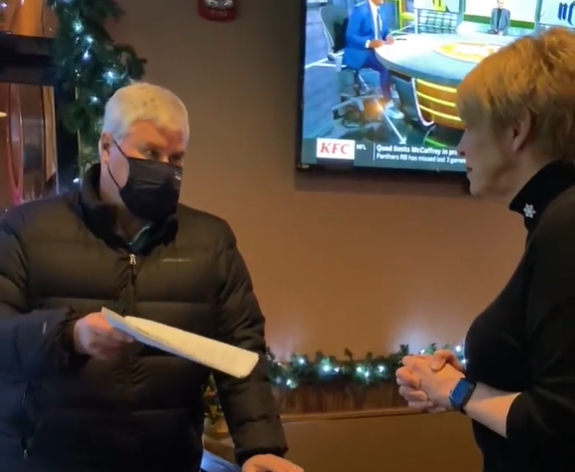 It was only a matter of time…

Keith Ellison and his goon squad are out in full force against small businesses in Minnesota. The latest victim is Jane Moss, who bravely defied Governor Walz’ illegal and unconstitutional executive order banning indoor dining.

We reported on Jane and her business reopening last week (read the story here). She was hardly open for a few hours before a Sheriff’s deputy came to stop her (image above)!

The thing is, Jane had no choice. She told the Grand Forks Herald that “...the Boardwalk, in her estimation, would not survive if Walz extended his order beyond the 18th, which he is widely expected to do.”.

More than 150 patriots have committed to opening their businesses in defiance of Governor Walz. The ReOpen Minnesota Coalition has been responsible for distributing pledges to Minnesota business owners who need to open in order to protect their livelihood. You can check out their Facebook page by clicking here. These businesses are expected to open in waves, the first of which being December 16th. What does the Governor have to say to these struggling business owners?

Walz’ plan to get these businesses to comply is to pay them off with their own money.

The legislature passed $217 Million worth of taxpayer dollars at the direction of Walz. The problem is, they are now shifting the cost of the lockdowns to YOU! Your tax dollars will be funding Governor Walz’ illegal shutdown!

The only way we can truly relieve businesses is if we end Walz’ powers, and open our economy! Do not let our politicians get away with shifting the cost to you!

Tell your representative to refuse Walz’ political bribes, and to end his emergency powers!