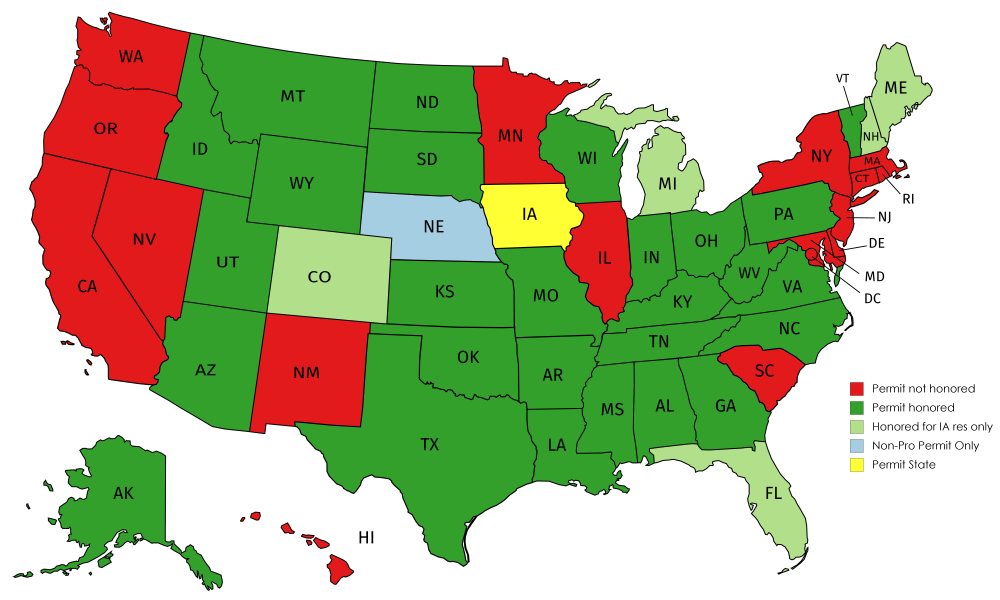 Unfortunately for us, the Dems of Minnesota have been eyeing gun control for a while now, which is an even scarier thought now that this party has control of all the branches of our state’s government. Even worse still is the RINO Republicans who are either too cowardly to stand up to the Dems or even support gun control themselves! All these cronie Minnesotan politicians can learn from what Iowa has been doing.

Iowa used to be a lot less just with its gun rights but has really come around in roughly the last decade and a half. Until 2011 Iowa was what is considered a “May Issue” state, which meant that you could apply for the right to conceal carry a firearm and you could get a permit *if* the local sheriff wanted to give you one. If something as small as the sheriff just not liking you came up, you could have your permit and your right denied.

Thankfully as of January 1st, 2011, Iowa changed and became a “shall issue” state meaning that as long as you meet the requirements to own a concealed carry permit, they have to give you one. Later in 2017 Iowa passed stand your ground which is important for self-defense. Without stand-your-ground laws, you cannot defend yourself until you've exhausted all other options. Of course, if your assailant is bigger and faster than you, you don’t have time to exhaust those options. Both Shall Issue conceal carry permits and Stand your ground laws gave back law-abiding citizens of Iowa their human right to defend themselves and feel safe.

And the icing on the cake is just recently Iowa adopted a strict scrutiny legal requirement into its constitution, meaning future gun laws need to be very specific and according to the state’s constitution future politicians can’t restrict gun rights.

Which is great for our neighboring state, but it just goes to highlight how terrible the politicians we have here our. The republicans we have or have had in office have not pushed to expand or secure our gun rights here in Minnesota. The RINO republicans that we have here refuse to do anything to help our 2nd amendment rights because they fear if they do nothing that they won’t get reelected. Interestingly enough, their act of doing nothing gave them little to stand on and a lot of them lost their seats to democrats this election anyways.

Because of their cowardice, they won’t stand up and secure the future of Minnesota’s gun rights because the do-nothing RINOs that have infested this state have been afraid that any action at all will harm their chance at reelection and to them, their cushy job in government matters more than our rights, safety, and wellbeing.

States like Iowa have people who are willing to defend the 2nd amendment, but you can’t expect the “Republicans” in Minnesota to do anything to protect our rights.