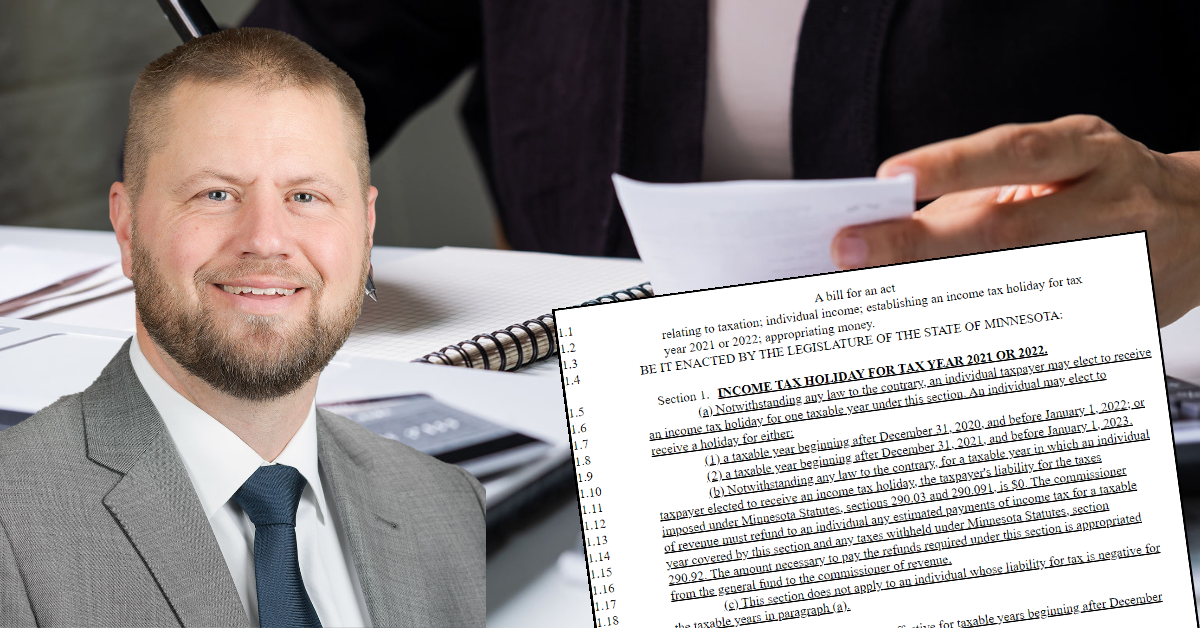 Lawmakers in St. Paul have been scheming to spend your surplus money for months now. Even though Minnesota’s two year budget was passed in 2021, legislators are already looking to spend the $12 billion that you were overtaxed.

Leadership in both the House and the Senate have moved their own proposals, both of which either tinker with the tax code, or send out small dollar tax returns to people below a set level of income – regardless of whether or not they paid their taxes.

Sadly, nearly all legislators in both the House and the Senate plan to spend your surplus money instead of immediately refunding it to the people. However, there is one legislator who looks to do right by the people.

Representative Erik Mortensen introduced HF4642 in late March to give Minnesotans a complete and total income tax holiday, which they can choose to utilize in the form of a tax refund for their 2021 taxes, or simply skip filing taxes for 2022.

The $12 billion has already been overtaxed. While tax cuts are great to ensure future overtaxation is limited, it does not address the surplus money already collected by the state. Mortensen’s bill addresses this problem head on.

And with rampant inflation, a break in taxes now will mean more for this year’s tax period than it will in a year from now. Money in the taxpayer’s pocket now may be worth much less come tax season next year.

Minnesota should outright eliminate the state income tax. Every year, the state loses residents to tax friendlier states like Florida and South Dakota. Until that can happen, this proposal is the next best shot at keeping Minnesotans in state.

The legislation currently has no co-sponsors, nor a senate counterpart. If you’d like to see your tax dollars returned, then contact your legislators and tell them to get on board with HF4642.