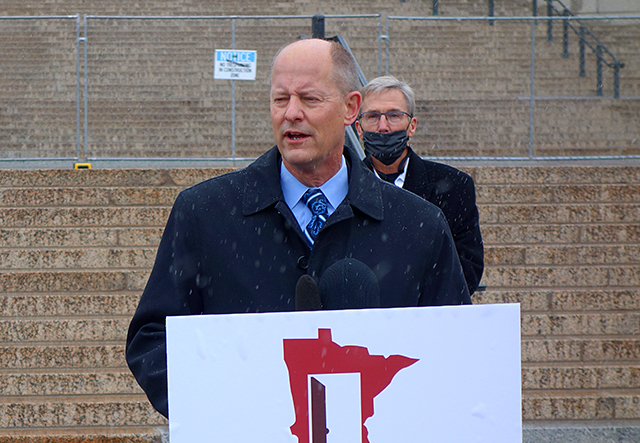 “Compromise” is a very popular word this time of year. Everyone from the mainstream media to your neighbors talk about how the state legislature needs to come together and “compromise” on the budget for the upcoming biennium.

In the traditional sense, compromise means that legislators on both sides give up a little bit of what they want for the good of the people that they represent. Unfortunately, that is not what it means in the Minnesota legislature.

The compromise that happens under the Capitol rotunda is the kind where Republicans pretend to fight for a few minutes, then give the DFL everything that they’ve been looking for.

Phony conservatives in the state house and state senate will say that they are pushing for no new taxes and no new spending. What they end up doing is less new taxes and less new spending than the guys across the aisle want. Can you really call them “conservative” if they don’t end up conserving anything?

Take a look at the sick tax in 2019. Senate Republicans had a real shot at repealing the detrimental tax that helped raise your healthcare costs. They rallied behind the slogan of “no new taxes” during the 2019 session, just like they are during the 2021 session.

Instead of following through on their campaign promise, Republicans “compromised” on permanently renewing the tax. So much for fiscal responsibility.

Then-Senator Scott Jensen played a big role in ensuring the sick tax was renewed. Jensen played right into Gover Walz’ hands by championing this tax on healthcare providers through the Senate. Now, he’s attempting to make the argument that he would be a good replacement for Walz.

Check Out The Full Story Here

It’s hard to take anybody at their word when they campaign on being “fiscally responsible”. Because the second they get into office, they will vote along with bad budget and tax increases just because establishment leaders are pushing for it.

Even DFLers have called out the Senate GOP’s hypocrisy by pointing out that they have compromised on their tax position in the same exact fashion before. DFLers know that Senate Majority Leader Paul Gazelka does not have a spine and will give the far-left what they want as long as they keep pressuring him.

Read What The DFL Is Saying About 2019

Don’t let Gazelka back down to the left again. Give him a call and tell him NO BAD DEALS on the upcoming budget.