Will Walz Slam On More Lockdowns?

Will Walz Slam On More Lockdowns?

We’ve all seen those old-school robberies in the movies. A shady character emerges from the shadows, takes an innocent’s wallet, then forces them to the ground. What you don’t often see is that same thief offering back a few loose quarters and acting like everything is fair.

That’s exactly what Minnesota Governor Tim Walz is doing. After pressing his thumb on business owners for nearly ten months Walz plans to toss them a few crumbs and be hailed a hero.

Today, “Tyrant” Tim Walz is using a Special Session in St. Paul to ram through a bad deal. Walz is packaging your taxpayer dollars into $260 million in political bribes for business owners to fall in line with his agenda.

Bribes that will make up for less than 3 or 4 percent of the losses that business owners suffered and that Walz himself caused.

Gov. Walz has been ruling Minnesota by executive order, commanding lockdowns across the state and grinding our economy to a halt. Unemployment skyrocketed, and small businesses closed down left and right while states like North Dakota remained opened and their economies boomed. Even when Walz picked here and there at cutting back restrictions a clear trend emerged. Big box stores and well-connected businesses had a green light and few major restrictions, while small businesses struggled to follow the maze of red tape.  Especially on Black Friday! A day when you would have expected the control-hungry political Left to more tightly regulate larger stores. 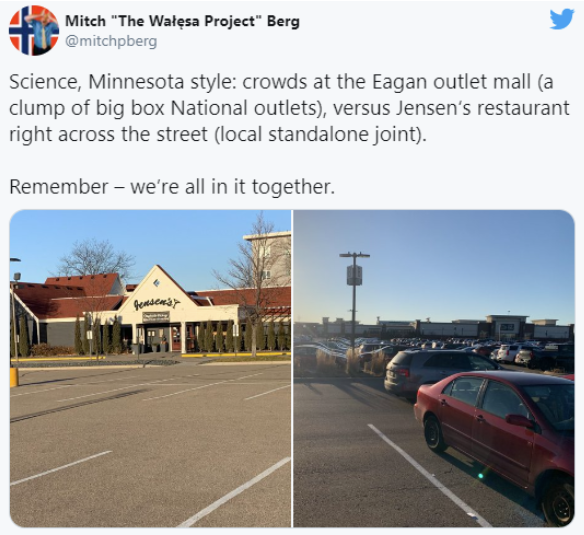 Governor Walz MUST be held accountable for his actions

Under Minnesota's constitution, the State House of Representatives has the power - in fact the duty - to impeach Governor Walz when he violates his oath of office, as he has repeatedly done during this State of Emergency. The State Senate will then hold a trial and vote to remove the Governor from office. The play is simple, but the politicians in St. Paul will not act unless they hear from you, because even your elected conservatives have trouble standing up to Walz.

If Minnesotans don’t comply, Walz says the beatings will continue. More Minnesotans will lose their jobs, more businesses will close, and the tragedies of substance abuse and depression will worsen.

The bad news for Walz is that Minnesotans will not comply.

You've heard the stories of Jane and Larvita, two courageous businesswomen who are standing up to Walz’s unconstitutional shutdown of small restaurants. Attorney General radical Keith Ellison sued Jane’s BoardWalk Bar and Grill to lock their doors for good! Jane and Larvita are facing fines, court orders and jail time just for operating legal businesses. Walz and Ellison want to make examples out of the men and women who dare defy their will.

Is that something you can tolerate?

Will you let power-hungry liberals like Gov. Tyrant Tim Walz trample over your rights and then place the blame for a global pandemic on your feet?

Walz is making naked exercises of power -- power that is rightfully left in the hands of the legislature.

Walz is making his own law, and he’s using it to pick winners and losers.

Walz is ruling by decree, his rules are arbitrary virtue signals, and he must be stopped.

Walz must be impeached.

Please pitch in $10, $5, or whatever you can afford monthly and join the Impeach Walz Task Force today!