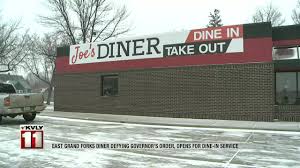 Have you heard of Joe Bushaw? He’s a 19 year old who opened a restaurant - appropriately named Joe’s Diner - in East Grand Forks. Joe WAS living the American Dream, before big government stepped in.

More specifically, before Governor Tim Walz and Attorney General Keith Ellison shut Joe down and threatened his livelihood. Since Walz adopted his own “emergency” powers last year, he has single handedly let businesses slip into poverty left and right. Walz’ orders keeping indoor dining rooms closed has NOT been supported by the experts, and is likely to cause more damage than it is worth.

Like many other patriots around the state, Joe decided that if he took the proper safety precautions, he would reopen his indoor dining room to the public -- just in time for the Christmas season. Joe quickly met Walz’ heavy handed friends and was shut down by the state. 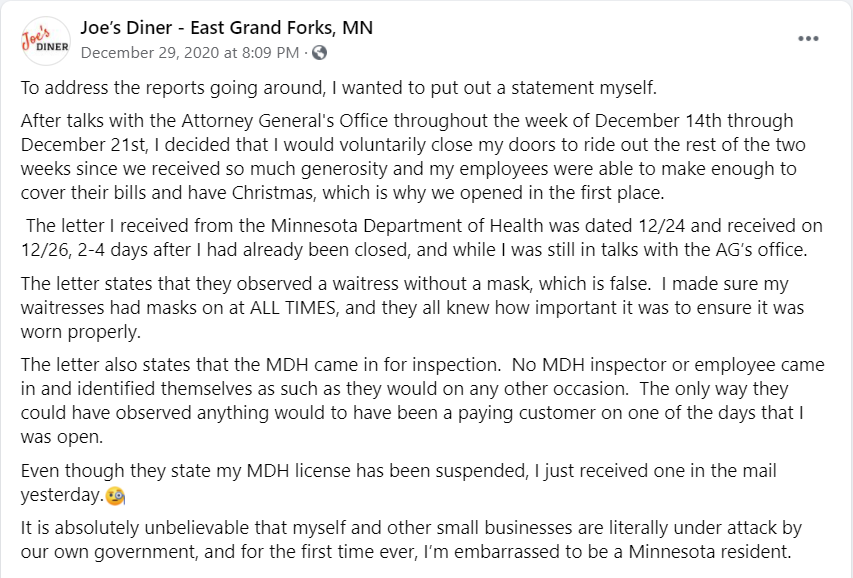 Joe’s Diner in East Grand Forks is just minutes away from the North Dakota border, where bars and restaurants are free to serve guests indoors. Why is it fair for Walz to shut down Joe’s restaurant, when his would-be customers can go and spend money in North Dakota instead?

Jane Moss of Boardwalk Bar and Grill is in the same situation as Joe. Her bar also serves the people of East Grand Forks, and has been shut down by the state in a similar fashion. You can read more about Jane and the other patriots around the state by clicking here.

Why should Walz and Ellison continue to collect their full paychecks while bar and restaurant owners slip into debt? Rep-Elect Erik Mortensen has pledged to introduce legislation that would rescind the Governor’s pay in times of self-proclaimed emergencies.

Mortensen has also pledged to introduce articles of impeachment against Tim Walz’ tyranny. The North Star Liberty Alliance is ready to back up his efforts with an enormous statewide ad campaign. Do you have our backs? Show your support by signing our petition, and sending it to your friends and family. Then leave a generous donation, to ensure our efforts come to fruition.