The New House Republican Caucus (NHRC) is trying to cheat by copying Representative Erik Mortensen’s (Mort’s) homework. Somehow, when they turned it in, Mort got an A+, while the NHRC got an F.

Not only is action petty, but it endangers the chances of serious legislation being passed. Mortensen’s bill has gathered serious support from across the state and is already being carried in the State Senate by Senator Mark Koran.

Walz is getting away with his crimes and only plotting more. He has only been allowed to get away with shutting down the state economy, keeping children out of school, putting COVID-positive patients in nursing homes, and much more because “conservatives” in the legislature care more about appearances than they do about principles.

Why has Governor Walz gotten away with making his own laws?

The controversies surrounding Governor Walz’ ability to issue edicts that carry the full force of law come from a state statute known as Minnesota Statute Chapter 12, which deals with emergency management. As of writing, there are two types of emergency declarations (§ 12.31)  available to the governor:

Governor Walz has utilized and repeatedly extended the latter provision. His actions have become extremely controversial notably because there is no provision for a public health emergency. Undeterred, Walz has re-upped his emergency powers every 30 days for more than 15 months. The powers granted to the governor under this vague criteria include:

Subdiv. 1:  General direction and control of emergency management; allows the governor to exercise the following actions.

Subdiv. 2: Allows the governor to cooperate with the federal government, other states, Canadian provinces, and private agencies.

Subdiv. 3: Governor can make, amend, and rescind orders to carry out provisions in this chapter.

If the New House Republican Caucus had their way, they would fortify the ability for the governor to utilize these sweeping powers by creating a “Public Health Emergency” declaration under § 12.31.

This law is where Governor Walz derives much of his modern day power -- despite its questionable standing with the Minnesota Constitution. Representative Duke Powell made many modifications to this law when he introduced HF1555. His proposal kept some of the worst provisions that Walz has taken advantage of, though it was a slight improvement over the 2002 law. More specifically, this new law:

You see, the governor has not had the ability to declare a peacetime emergency in the name of public health since former Representative Duke Powell passed his bill eliminating its definition. If the NHRC successfully reintroduces a public health emergency declaration under chapter 12, Walz would be free to continue on his executive tirade against the liberties of Minnesotans.

New House Joins Many Other Bad Attempts To Reform Ch 12

In March of 2020, Many Republicans in the State Legislature backed Governor Walz’ use of emergency powers. It was only when groups like North Star Liberty Alliance began to raise this issue that legislators took notice and got to work on ending Walz’ executive emergency. Unsurprisingly, many of these proposals were all bark and no bite.

Weak attempts to end Walz’ tyranny included Representative Kurt Daudt’s MG022, which left the overwhelming majority of the governor’s power to declare sweeping emergencies intact. Another weak proposal from Representative Dave Baker sought to create a timeline of winding down some of Walz’ impact upon private businesses. His bill -- HF1336 -- would have still had tight restrictions on businesses even as the worst of the pandemic was over.

Believe it or not, The New House Republican Faker’s bad attempt at reforming Walz’ emergency powers actually includes some of the same provisions as a bill introduced by DFL Representative Julie Sansteade. Her bill -- HF1515 -- also makes an effort to legitimize Walz’ emergency powers by putting a definition of “public health emergency” into state law. In fact, this DFL bill uses the same exact definition of public health emergency that the NHRC’s does! 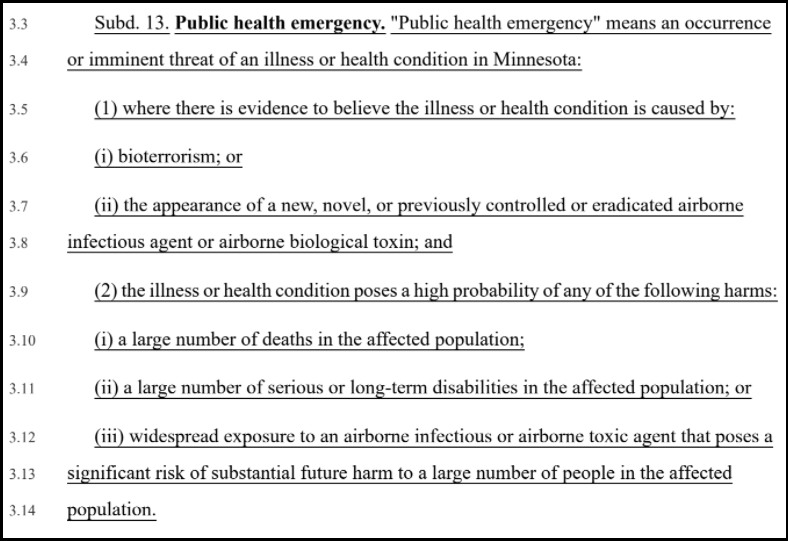 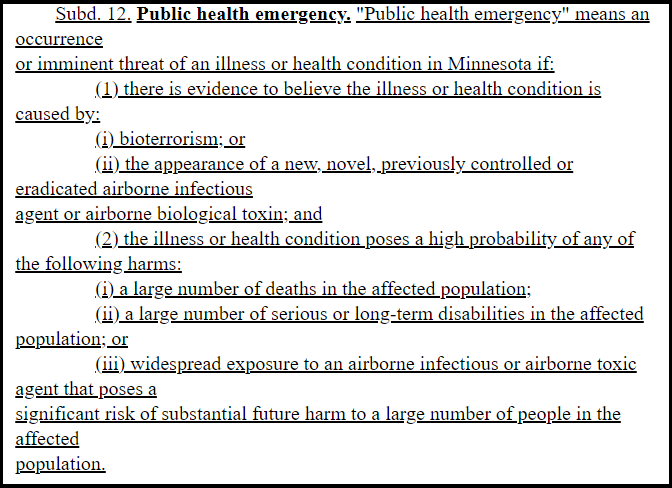 Mortensen’s Never Again bill takes aim at the governor’s ability to declare an executive emergency. If passed, the governor would have absolutely no emergency powers until approved by a 2/3rds majority in the House and the Senate. If the governor abuses their powers, they can be thrown in jail and fined. This proposal would also create a citizen’s bill of rights that ensures and protects the individual liberties of Minnesotans.

Mortensen’s bill is the only true piece of legislation that ensures the detrimental lockdowns of 2020 never happen again.

In fact, it appears that the New House Republican Fakers agreed! Or at least, they agreed at one point…

As of writing, Jeremy Munson, Tim Miller, and Steve Drazkowski are all cosponsors on Representative Mortensen’s Never Again Bill!

If they agreed with Mort when he first introduced his Never Again bill, then what changed? Sadly, it seems that the RINO leadership in the State House has gotten to the New House Republican Fakers. When you dive into the specifics of their brand new phony “Never Again” bill, it appears to carry some of the same nothingness that the plethora of other bad proposals do.

If you are one among the countless Minnesotans who are tired of legislators refusing to hold Walz accountable, then take action with North Star Liberty Alliance! NSLA has been pushing legislators to hold him accountable by Impeaching him and removing him from office. Have you signed the official impeachment petition?

Every signature gathered gets sent to your state representative. Every name put to paper is one more name that your legislator has to read when they weigh out their impeachment vote. So please, sign the petition and send this article to everyone that you know!