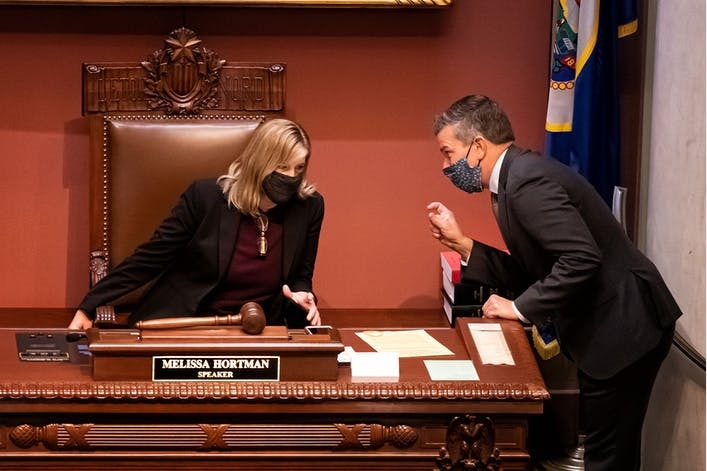 Did you hear that Representative Erik Mortensen introduced a resolution on Tuesday to end Walz’ illegal and unconstitutional powers?

You can thank the fake news media. Right now, they are trying to cover for Speaker Hortman, who blatantly violated house rules just to avoid hearing Representative Mortensen’s resolution.

The StarTribune will put out propaganda headlines like this: Concerted push to end Gov. Tim Walz's emergency powers faces steep odds at Capitol.

The fake news media wants to cover for legislators who refuse to vote on ending Walz’ powers.

In the article, they cite Hortman’s made up rule requiring 90 votes to bring up a resolution ending the lockdown. According to rule 4.30 in the house rules, bills and resolutions only need a simple majority vote to be recalled from committee. No major outlets even brought this up.

On Tuesday, the media failed to cover Hortman’s blatant violation of the rules when Mortensen tried to introduce his resolution.

Mortensen followed house rule 1.10 and submitted his resolution to the Chief Clerk more than 24 hours before the session began. Speaker Hortman and Leader Winkler then violated rule 1.11 and ruled Mortensen out of order when he tried to introduce his resolution for its first reading. 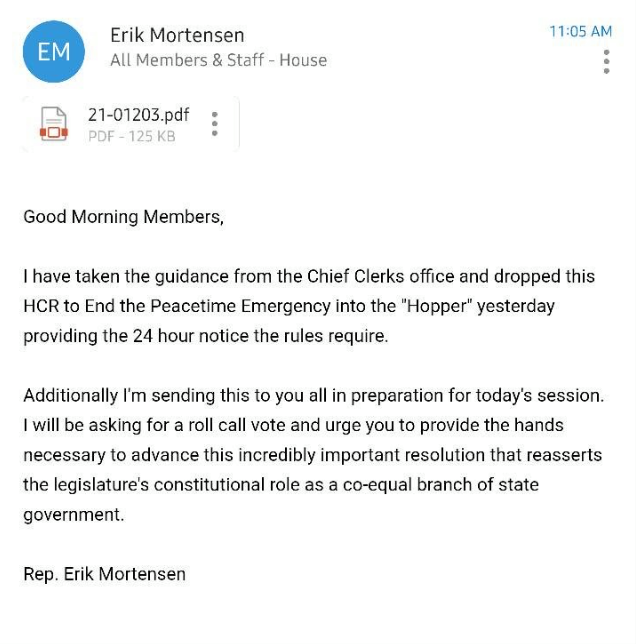 Some fellow legislators in the house stood up for Mortensen, arguing that Leader Winkler had moved to introduce several resolutions and that Mortensen should be granted the same ability.

The establishment cannot get away with shoving Mortensen under the rug forever. He’ll keep introducing his resolution until it gets a fair hearing, and a fair vote.

If you want to see some real action, call Speaker Hortman and Rep Winkler, and ask them to give Rep Mortensen’s resolution a fair hearing!

Now that the legislature is in regular session, our grassroots supporters MUST take action on ending Walz’ powers. Call the numbers above and tell them to have a vote on ENDING Walz’ illegal orders for good.

After you call, be sure to sign our petition to impeach “Tyrant” Tim Walz, and end his hold over the Minnesota economy for good!