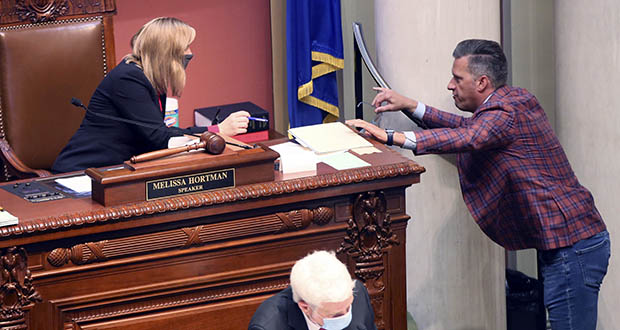 Just as the sun rises in the east and sets in the west, politicians lied to us. During campaign season and even since, Representatives Sanstede, Lislegard, Eckland, Marquart, Sundin and Pelowski told voters and constituents they were for Ending Walz’ Emergency Powers and even voting to move to do so in the past.

Worse yet, both parties are openly talking about pushing a Fake End Powers bill and codifying these illegal and unconstitutional edicts into law, which is FAR from ending the powers. These crooked politicians are actually working against us and trying to snow us. Don’t buy their lies.

These Emergency Powers don’t need to be “reformed”, they need to be outright ENDED. And it’s legislators like Rep. Barb Haley and other House Republicans that are leading the charge to try to sneak this through and make Walz’ Powers permanent.

These deranged politicians even went so far as to say there hasn’t been property debate on this. What? Did we hear that right? We have had this voted on almost a dozen times and thoroughly talked through and it’s abundantly clear Minnesotans want an end to the madness.

With the failure of Republicans to get their colleagues to vote with them, they are waving the flag of surrender and trying to compromise, making Walz’ Emergency Powers PERMANENT. Republicans are angling to codify them into law forever. Unreal.

What we really need is to Impeach Walz NOW. North Star Liberty Alliance moving this forward by pushing out our statewide campaign THIS WEEK. Are you a part of the grassroots army that is making it happen? You can start by putting your name to our petition:

When you sign, please consider a donation to support our efforts.

Impeachment will certainly be difficult, but it is more than possible with the help from our grassroots army. We’ll see you on the front lines.