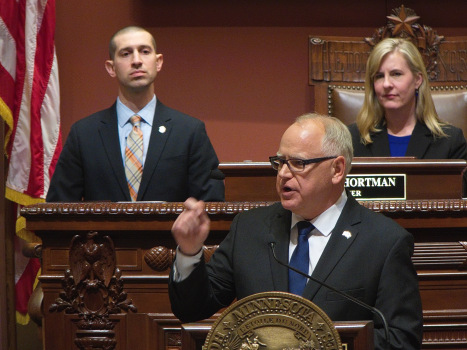 Image obtained from the Pioneer Press

The Minnesota Senate Republican Caucus may one day be the conservative stalwarts that they pretend to be on the campaign trail. However, that day is unlikely to come any time soon.

Senate Republicans announced late Wednesday night that Senator Jeremy Miller had been elected to be their majority leader. Miller is currently serving his fourth term in Senate, and has served as Senate president since 2019.

This shakeup in leadership comes as then-majority leader Paul Gazelka stepped down from his leadership position to mount his campaign for governor. Many rejoiced at the prospect of a true fiscal conservative leading the Senate Republicans, but were then disappointed to hear that Miller would take Gazelka’s place.

If his track record has anything to say about it, these “priorities” likely include budget busting bills chock full of spending increases for non-functioning executive agencies in Governor Walz’ administration. Under Gazelka’s leadership, Radical-Attorney General Keith Ellison’s office saw a bump in spending, even after he threatened to jail business owners last year. Now-senate majority leader Miller voted for and supported this increase.

Worse yet, Senator Miller and his phony-conservative friends voted for insurance company bailouts using taxpayer dollars in 2017 (SF1). It is clear that Senator Miller’s interests are not with the people of Minnesota, and certainly NOT with the hardworking liberty-activists of the state.

Jeremy Miller is Paul Gazelka 2.0, and he must be treated as such. If he is going to change his ways, he needs to hear from you! Give his office a call and tell him that he cannot kowtow to the radical-left like his predecessor did.