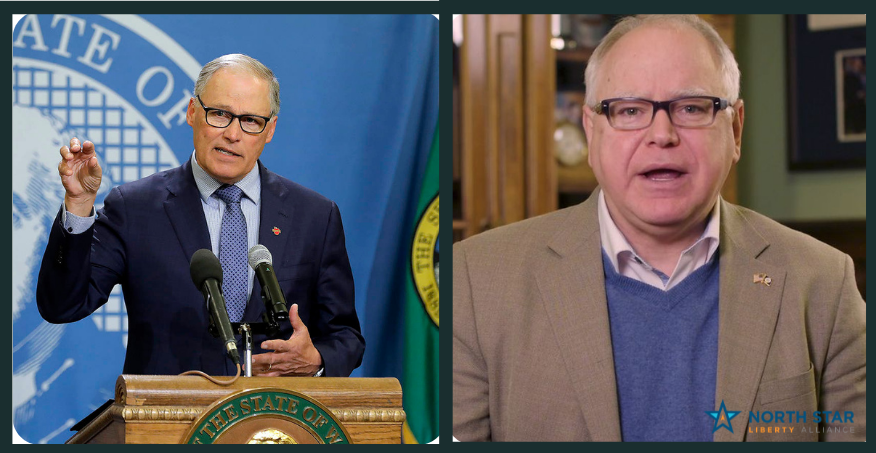 For many months now, the North Star Liberty Alliance has warned that the implementation of vaccine passports is imminent. Though people are free to pursue the COVID-19 vaccine if they chose to, nobody should be forced to recieve it against their will. Unfortunately, the vaccine passport policy is gaining steam around the Nation. In states like Washington, it appears that you’ll need the vaccine before you can return to work.

Washington Governor Jay Inslee announced that employers within the state can only drop their mask policy after they provide documentation to the state proving all employees have been vaccinated. Not only is this a severe overreach from government into the private sector, but a blatant violation of health privacy.

If you live under the rule of Governor Tim Walz, then you probably are ready for what comes next. Tyrant Tim loves to borrow Orwellian ideas from his fellow governors around the nation, and Inslee is not an exception. He is not going to stop at vaccine bribes, he is going to keep pushing this thing until every single Minnesotan is vaccinated.

Do you remember when the Minnesota Department of Health teased the possibility of vaccine passports in Minnesota?  They’re prepared to enforce any policy that Walz conjures up, and “conservatives” in the State Senate just agreed to fully fund the department for the next two years. In fact, they agreed to fully fund every state agency that played a role in shutting down small business owners last year. All of this comes after Senate Majority Leader Paul Gazelka talked a big game on holding these agencies accountable.

No matter what your legislators choose to do, the North Star Liberty Alliance will continue to inform you about threats to Liberty in Minnesota, and put pressure on any politician who seeks to infringe upon your rights. Among our efforts includes our push to impeach Tyrant Tim Walz. Have you and your friends signed the Impeachment Petition?