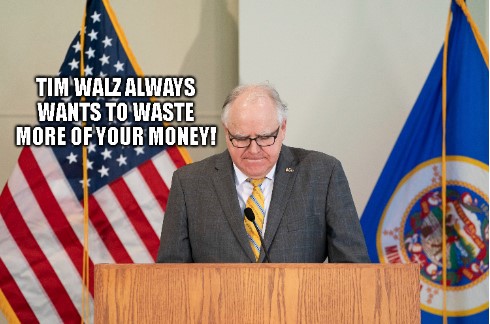 Tyrant Tim Walz is now refusing to debate anyone on how he’s doing as governor. The reason is obvious:

Tim Walz has done a terrible job as governor and can not defend his actions!

During last week’s governor debate, Tim Walz did attend and he defended Minnesota’s high taxes during a state surplus saying that any money we tax comes back to us ten-fold. The only problem is that’s simply not true, especially considering how reckless Tim Walz and his political cronies have been with our tax dollars.

The most prominent example of this in recent history is of course the biggest Covid-19 fraud in the country being entirely orchestrated right here in Minnesota. As of writing these 50 individuals have been indicted for frauding $250 million dollars in aid meant to feed children during the pandemic through the government program “Feeding Our Future”. This money obviously came out of tax dollars but now it’s being reported that Tim Walz and his underlings did nothing to stop this fraud until it was too little too late.

It is important to note that Minnesota statutes legally require that state agencies inform the legislative auditor if they suspect any tax funds are being misspent. Well, state lawmakers have highlighted the clear opportunities Walz had to notice and stop this mass fraud but failed to do so.

According to Alpha News, Tim Walz and the Minnesota Department of Education failed to do site checks and also failed to demand bank statements that they were entitled to by state law.

Thankfully the Legislative Auditor is doing an investigation now and hopefully, we get to move past the lies of Tyrant Tim and start to know the real truth early next year.

All of this shows how entitled Walz feels about your money, and how reckless he is with it. He’ll make up garbage about how our taxes “come back tenfold”, but we know that’s not true. Our tax dollars are recklessly wasted by a government that doesn’t care how much it loses. The only people who got our tax dollars back tenfold were the people who committed mass fraud and used it to buy expensive cars and land in Kenya.

Even during a recession, even during a surplus, even during record high inflation, and even during the biggest Covid-19 fraud in the control, nothing seems to stop Tim Walz from saying failing government deserves more of your money. He knows he can't defend this behavior anymore so he's stopped trying.