Yet Another Possible Example Of Covid Fraud In Minnesota

Yet Another Possible Example Of Covid Fraud In Minnesota 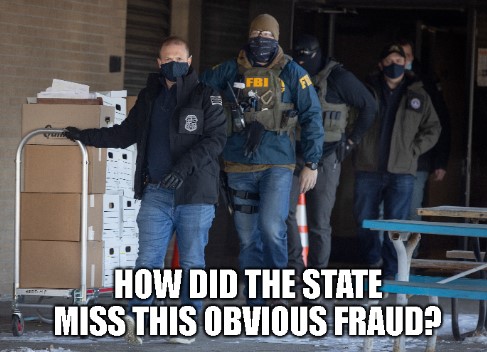 Time and time again our state of Minnesota becomes a hotbed for massive historical levels of fraud. This time the writing was blatantly on the walls for years and our government continued to still waste tens of millions of dollars regardless.

Today’s article revolves around one woman from Bloomington, Ayan Akubar, who despite having a shady past and losing her childcare license, earned an award for claiming to help East Africans. Ayan Abukar claimed she fed 6,400 children a day, yet one of the food distribution addresses she gave didn’t even exist.

According to the Minnesota Reformer, Back in 2012 Akubar took over a childcare facility and opened Action For East African People in 2017. So far all noble causes, but when the government gets involved things don’t stay noble for long.

In  2019 her childcare license was revoked for “providing false and misleading information and failure to comply with licensing laws and rules”. Despite this, the state and federal governments gave her millions of dollars in tax dollars with the purpose of feeding kids at her supposed food distribution sites.

One site is a Bloomington address that doesn’t exist in real life. Two sites given had the same address yet both claimed to be feeding 1,500 children a day. They also tried to claim that a Somali-American Peace Council was supposedly feeding 3,000 kids from its building every day.

These are all obvious red flags now and it begs the question how come the Minnesota government didn’t notice this and step in sooner? As we've covered before, the government did nothing during the height of Covid-19 and let over $250 million dollars be lost to the fraud machine that was Feeding Our Future.

Akubar continued to open or claim to open food distribution sites with no oversight until the 9th one was denied by her sponsor agency, Partners In Nutrition, which was outed and later terminated for its connection to Feeding Our Future, the center of the $250 million dollar fraud scheme here in Minnesota. Partners In Nutrition was supposed to be a nonprofit that distributed funds out to distribution centers like the ones Akubar was supposed to be running.

While no charges have been pressed on Akubar yet, she was giving fake addresses and reports about her food distribution centers. Additionally, her sponsoring agency Partners In Nutrition was founded by the FBI to have been “directly responsible for distributing $58 million in misappropriated funds.”

Whether Akubar did something wrong or not is not the point here. The point is, it's very obvious how shady this whole government deal was. Instead of feeding the kids, they said they were going to, the government forcefully took our tax dollars and did nothing while hundreds of millions of tax dollars were frauded basically out in the open. Every day we learn more and more about how obvious the fraud was and how the Walz Administration and the MN Department Of Education just let it happen without caring.

The more apparent how obvious this fraud was, the worse Tim Walz and his political lap dogs look. It’s just sad that the government always finds a way to meddle with our lives, but never stops its lies.