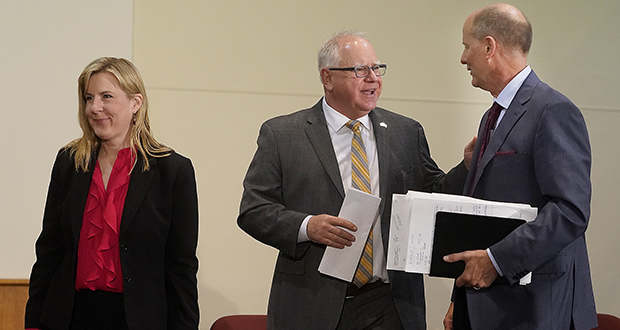 Though she refused to call out members of her own party, Left-wing Minnesota State Senator Erin Murphy made a very rare good point on Wednesday.

On Twitter, Murphy criticized the lack of transparency in the budget negotiation process. Despite agreeing on rough spending targets on May 17th, legislative leaders are still hammering out the final details on the specifics of what the final budget will look like. Though they’re supposed to finish negotiations by Friday, legislators may keep the details under wraps until the special session on June 14th.

In her video, Senator Murphy shows the empty rooms in the Minnesota Capitol, noting that the people of Minnesota are being “shut out” of talks over the $52 billion budget. Former GOP House Majority Leader, Matt Dean, quickly tweeted his agreement on the lack of transparency in the Capitol. Despite calling out the secrecy, Senator Murphy is highly unlikely to take any real action towards righting this wrong. Just like most of her Senate colleagues, she is all talk and no action.

Openness about the budget and legislative proceedings in general has been a huge problem during the 2021 legislative session. With most proceedings now being held privately on Zoom, Minnesotans aren’t learning about how their elected leaders are scheming to waste their tax dollars.

If the budget is hidden from view until Governor Walz calls a special session on June 14th, legislators can sneak whatever pet projects they want into this spending bill without consequences.

The second that the budget agreement becomes public, the North Star Liberty Alliance will get to work on analyzing every spending proposal in the budget and report back to you on just how much waste your elected officials are pushing for.