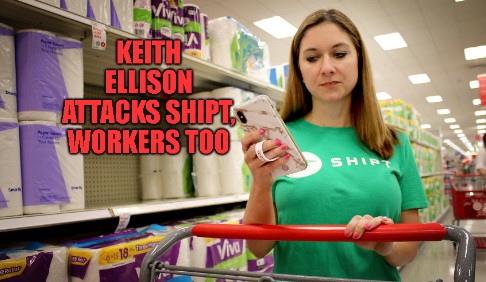 Today many Minnesotans lead busy lives. You could have work, kids, school, projects, family, or friends. This can be a lot to balance and you have the right to contend with all of this in a way that works for you. Some people pick up contract jobs on the side as a way to earn some extra income with the flexibility of their schedule. For students and other busy but enterprising individuals, this sort of job is a blessing and exactly what they need in life. It is clear evidence of how the free market and the right to work can be a boon in our lives. There’s just one problem, Minnesota Attorney General Keith Ellison doesn’t want you to work a job you are happily willing to do.

To put in perspective what opportunity is available through the free market here, Shipt is a contract job where you sign up to pick up people’s groceries and bring them to them. Once you sign up for this job you can look at the available work hours and choose when and how long you wish to work. Perfect for students or someone that wants to make a little extra dough. A flexible job where you can choose when to work.

Many services such as Instacart and Doordash exist like this and they’re a pleasure to work with. I’ve personally worked a lot of Doordash on the side before in conjunction with a full-time job when I wanted to save up money and get a new car faster. You can make extra money on your time and stop whenever you want. This is a great opportunity not available through the government but through a consensual market. Unfortunately, the government has to step in and try and make things worse.

Minnesota Attorney General Keith Ellison wants to get between workers and a good job. Workers and employers have a right to work in this agreement as it’s beneficial for everyone. Unfortunately, Keith Ellison wants the government to step in and ruin it. As reported in KSTP News, The AG filed a lawsuit on Thursday saying Shipt misclassified its workers as “contract workers”.

Keith Ellison claims he’s doing this for the workers, trying to fear monger saying that as contract workers, Shipt workers can only accept jobs when they’re available and trying to make it sound Shipt employees don’t know if they’ll get paid for their jobs. These are fake excuses to go after legitimate business practices. The work hasn’t dried up, Shipt workers can still go in and make money. Additionally, there’s no record that a Shipt worker didn’t receive their pay for completing their contract. Keith Ellison is needlessly trying for a government takeover and pretending like that means he’s saving the day.

It’s about government control, not helping workers. Politicians lie as naturally as they breathe. Think about it, have you ever heard a politician say: “I hear to harm you and do bad to you?!” Of course not. The government always wraps its actions in fake righteousness that actually harms people.

If you want to see the effect that a government takeover has on private contract work, look no further than California. As reported by the Pacific Legal Foundation, bill AB5 was passed years ago. This legislation drastically hurt the relationship that workers and business owners had before the government stepped in. Additionally, AB5 forcefully classified some contract workers as employees. This prevented these employees from doing what was best for themselves. A great example is how truckers who owned their own trucks were no longer allowed to set their own work times or choose their own insurance that works best for them. In California, the free market provided opportunity and flexibility but the government takeover took that away.

And since the government takeover making contract workers into employees has begun, and some of the aforementioned workers are going to be seen as employees and wish to be unionized. Those who wish to be unionized want a single board to negotiate a contract for all the workers. This will make everything efficient and slow the entire process down immensely. Because the Californian government stepped in back in 2019 with AB5, everyone's about to lose.

And now Keith Ellison wants to take the same path. He wants to take away workers' rights and make contract services worse for everyone.