Mask Mandate To Be Put In Omnibus Bill?

Mask Mandate To Be Put In Omnibus Bill? 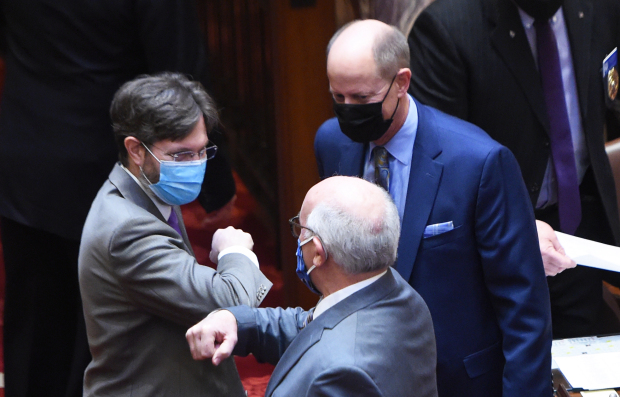 “When you can’t pass it on its own, throw it into the omnibus bill.”

That’s the attitude that Republicans and DFLers alike have taken to a whole variety of issues.

When so many different proposals (including pet projects) get tossed into one big bill, legislators are more inclined to vote for it because there is more at stake.

Omnibus bills, or bills with a variety of subjects, are expressly prohibited by Article IV, Section 17 of the Minnesota Constitution:

“Laws to embrace only one subject. No law shall embrace more than one subject, which shall be expressed in its title.”

It is always sad to see legislators (on both sides of the aisle!) abandon their oath to the Constitution.

What’s even worse for the people of Minnesota, is that Walz’ permanent mask mandate may be tossed in with the omnibus bill.

That’s right, though the bill itself was put aside, there very well may be an effort to bring it back to the floor.

Senate Republicans ought to make NO DEALS until Governor Walz agrees to give up his emergency powers.

Anything less than a clean repeal of these job-killing executive orders is a betrayal to the people of Minnesota.

Send Majority Leader Paul Gazelka an email, and tell him NO MASKS and NO DEALS!