Walz Runs From His Terrible Record, Hides Like Biden

Walz Runs From His Terrible Record, Hides Like Biden 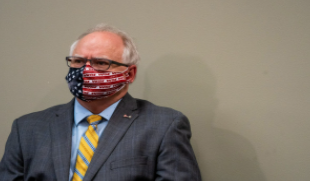 Looks like Tyrant Tim Walz is “courageous” enough to both take away your freedoms and destroy your livelihood, and somehow still thinks he should continue to be the one to do so. Yet for all that gall, Tyrant Tim isn’t brave enough to debate why with his opponent Dr. Scott Jensen.

In years past Walz had no problem debating opponents on TPT, aka Twin Cities Public Television. However, this year Tim Walz refused to do the debate, after he agreed to it. It’s not often a candidate agrees to a debate and then chickens out, but then again Tim Walz has much more to answer for in a debate than most politicians, and that’s REALLY saying something! 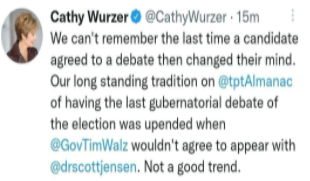 You may remember back in early August, Walz debated Jensen for the position of Governor. Given his many past abuses of power, Walz was righteously flamed for many past failures on his part as governor.

One big thing Walz is afraid to answer for is how he didn’t hesitate to shut down small businesses. For years the lives of Minnesotans were half taken from them as the megalomaniac Walz seized the opportunity to force you in your home and left our hard earned businesses to crumble. Once a shot was created he didn't hesitate to push the Jab or no job policy he liked so much.

The residents of Minneapolis will remember when Tim Walz did hesitate though. For 3 days innocent people had their businesses destroyed while Tim Walz hid away and did nothing to protect people’s private property.