Why Real ID Is Bad For Minnesotans

Why Real ID Is Bad For Minnesotans

The federal Real ID Act of 2005 was passed with the intention of creating a federal registry of citizens and their private information. Minnesota was one of the last states to adopt the new Real ID standard for its drivers licenses, despite protests from the grassroots on both sides of the aisle.

Former State Representative Dennis Smith recently touted the passage of Real ID as one of his prime accomplishments in the legislature. In a video announcing his run for Attorney General in 2022,  Smith claims that his bill “...made air travel safer”.

Here’s why Smith’s 2017 Real ID Bill is bad for Minnesotans:

Dennis Smith, along with the establishment leaders of both parties, pushed this bill through in 2017, despite harrowing opposition from the most conservative activists. Several local Republican Party units like the Scott County GOP passed resolutions condemning Real ID. 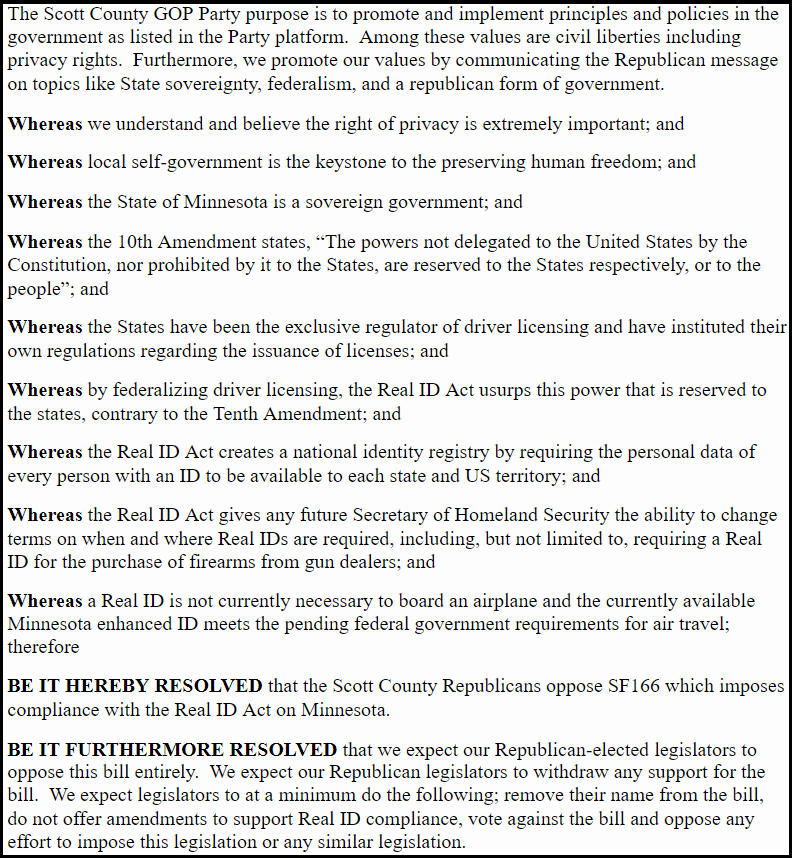 Despite representing Scott County in the Minnesota Legislature, Representative Tony Albright (R-55B) co-sponsored HR 3 and Senator Eric Pratt (R-55) sponsored SF 166. They chose to completely ignore the people that they were supposed to represent.

Because of COVID-19 restrictions, the deadline for mandatory adoption of Real ID has been pushed back to May 23rd, 2023. Only then will all Minnesotans realize just how bad Dennis Smith’s bill really was.